The range of things that go on behind the veil of an API are legion. So much can be hidden here that it can very quickly become startlingly complex in a very short amount of time. I’m going to show the general approach that I take, which has served me well since the dinosaurs were killed off and the Internet emerged as a service delivery system.

The trick in my mind is to separate and isolate into layers early and often, with a view to collapsing those layers during an optimisation phase. You want to be as productive as possible without doing anything that gets you into trouble later. In many respects it reflects your life in your early twenties.

The Simplest Architecture for APIs

I can’t begin to enumerate how many systems I have built that follow this general architecture. From early WS-* systems for gaming, through telecoms systems to back office tools and middleware (in the broader sense) to financial system this is consistently my go-to architecture.

It offers almost nothing imaginative, creative or innovative to my development, but it is a solid framework to which I can logically add code. In very broad strokes it allows me to define a home for the functions that are needed to build out the API. These broad strokes involve the following elements:

So here it is, the big reveal 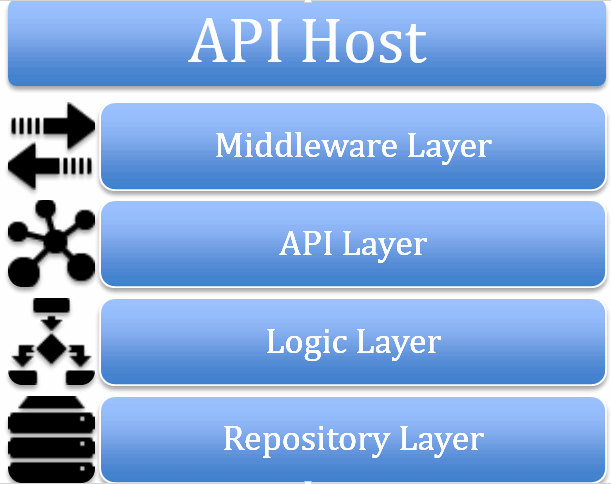 Recovering quickly from your disappointment at what looks like a four year olds guide to software architecture I’ll push on with the explanation.

Having laid bare the soul of so many production systems in one fell swoop, lets jump into each of the layers to see what they do

Your API will need to be hosted in some form of container, whether it be a full blown web server, or NodeJS in a Docker container you should expect certain capabilities to be available. I expect the host to provide a way to intercept the request / response at the very perimeter, even before it has been routed to the requisite API so that I can fiddle with the message early. This is what I call the middleware layer. I know it looks like its at the top but the diagram hides some inherent services from the host.

I always handle authentication in the middleware layer. Frequently I’ll add a generalised logging layer and often a telemetry layer for performance management and monitoring.

In many cases, although not always, my middleware layer will handle some form of validation on query parameters to ensure early detection of cross site scripting attacks or injection attacks.

My middleware layer will always have a handler for uncaught exceptions.

Whether it’s RESTful or WS-* I keep the actual API layer very shallow. I really just want this to be a handoff to the logic layer. In my typical API layer I will deal with the verification of parameters and messages on inbound messages that are application specific, and not previously handled by the middleware layer.
Similarly I don’t really want it to get tin the way of responses. My API layers are responsible for translating the response codes from the logic layer into appropriate API level responses. For example in a RESTful service, a successful response from the logic layer would be translated into a HTTP 200 status code for return.

The logic layer is the area where I end up with the greatest diversity of function in the APIs that I develop. In my world it exists to act as a glue layer between the public facing API and the back end systems that are being wrapped.

If the API is providing access to an enterprise system, the logic layer can be responsible for initiating and firing complex workflows as a result of input from the API layer, or it might be as simple as translating messages into an appropriate format for the repository layer.

Given the rich ecosystem that WS-* services offer for orchestration and transaction management, I’ve often found that these services are managed external to the API. RESTful services in contrast are poorly serviced in these areas and it is these operations that exist in the logic layer.

If the API layer is thin and the Logic Layer is complex then the Repository layer is the neurotic layer with body image problems.

The first thing to notice is that I call it a ‘Repository’ rather than a persistence or storage or database layer. Borrowing a little from the fine work of the Domain Driven Design camp, I want this to convey the concept that this is where data lives without it making any reference to its lifetime or long-term storage mechanisms. If this seems particularly rational, pedantic or even well reasoned then you should prepare yourself for disappointment as we move on. Pretty much everything else that follows is a bit subjective at best. Also the word has the potential to be misspoken which then makes the entire discussion sound a bit rude!

The data that is going to live beyond a single session needs to be stored in some form of repository, whether it is a database, a memory cache or some fantastic appliance is largely irrelevant from the perspective of the logic of the system. Extending that principle we can also agree that the logic layer shouldn’t know what grinders the data needs to be put through to actually achieve this storage. So the repository layer is the place where the logical data gets transformed from the form it takes when being processed by the logic to the form it takes when being stored and vice versa.

Things start off fairly easily in the repository layer, we want to support the standard CRUD (Create, Read, Update, Delete) operations and given the logical one to one correlation between the data being used in the logic layer and the data being stored in the repository layer we can make excellent headway at the early stage of development. It’s queries and their results that really scupper our efforts.

If you’ve diligently read all that has gone before you’ll immediately see the problem. I’ve previously asserted that the query that results in a collection of data should not return that full collection in a single call. I’ve also stated that the collection returned should be a summary of the data, not the full data for any given item. Its easy to fall into the trap of ensuring that all logic exists in the logic layer, which would naturally lead to the conclusion that this manipulation of data to produce a summary should occur in the logic layer.

In the hope of sidestepping the possibility of contradicting myself, I’m going to show a set of guidelines for a repository layer that hopefully help inform the decision for you.

Rules of the Repository

I’m not noted for my memory. This is particularly true when it comes to code in specific projects. I’m more likely to need to look at my code to see what I was doing than immediately remembering what I did. The upshot of this particular deficit in my abilities is that I tend to write fairly expansive code that I might later collapse down.
Enter the Decorator Pattern. I can honestly say I use this all the time…

Accepting a scenario where I want a customer records repository, but I want it to use a cache, timing, telemetry and logging.

You can already guess that your initial instinct to bunk all of this functionality into a single implementation is wrong (right?). Nope following our ordinance of single responsibility, we’re going to take the higher road on this one, writing a bit more code, but ending up with a much higher degree of both flexibility and control as we go.

Remember SOLID? We’re going to run through SOLID for these examples, but not necessarily in the order defined.

Lets start with the interface segregation (I), which will define the contracts that control what we’re doing; we need two pieces, data contracts and interface definitions:

Note the rather elegant nested class here – you’ll need it later and won’t be able to find it.

I’m cheating here a bit by using generics, it allows me to define a single interface for concrete repositories that vary only by the type of data being stored.

So now we have the basis for our repository, we know the structure of the data that we’re going to pass around and we know what behaviours we need our repository to exhibit. Lets push straight into the repository itself which we want to adhere to the S, and the I of SOLID in one fell swoop:

There are a couple of things to note here:

So where do we put all of this other functionality?

Referring back to our SOLID principles we only want a single use, which in this case is the storage of data, not the logging, timing or all the other requirements. Similarly, we only want the functionality of this class to be accessed through its interfaces, which will be really important very shortly, so we declare it internal.

If you’re still with me you’ll know that I’m about to create two more classes, one that performs logging and one that performs caching.
We’re going to use the Decorator pattern, which is a form of a wrapper that adds functionality and then delegates to the class being wrapped. This same effect can be achieved using a chain of responsibility pattern or through simple inheritance but the side effects of these approaches are greater than using decorators.

The trick here is to declare a class that implements the exact same interface as the class it’s wrapping. When a call comes in to its GetSummaries method, it logs it and then passes the request on to the component that it’s wrapping. That may seem like a lot of work for little benefit, but bear with me for the minute, and you’ll see how powerful this approach can be.

The caching decorator starts to expose the value of this approach. In this case, we’re doing a specific implementation of the interface as this cache is for a specific type of item. This decorator gets the call first to get customer summaries. It checks the internal cache to see if it can satisfy the request from cache. You’ll need to ignore the horrible key being used. If it can it will return that data. If it can’t then it drops the request to the class being wrapped and caches the response before returning. Thus the next call in will be satisfied by data from the cache.

Pulling it all together

If that all seems a bit abstract, its only because I haven’t shown you how all of this will come together, whilst also satisfying the D in SOLID.

In this style of coding, a factory constructs our objects. I should note that the many dependency injection engines are factories at their core. Here’s our factory:

When a consumer of this interface calls GetSummaries, the call will first be logged, then the cache will be checked before finally dropping down to the concrete repository to be satisfied. The consumer has no idea that all of this is happening – it just looks like a call to GetSummaries.

I can remove logging or caching by simply changing this factory method without a single change to any other code – and that my friends is the power of the decorator and factories.

This site uses Akismet to reduce spam. Learn how your comment data is processed.